Home Contributors Somalia│Where are all the pirates?

Do pirates go to heaven?  No, that isn’t the title of a Country and Western song, it’s just a thought that sometimes good guys do bad things when they have little choice.

After civil war brought down Somalia’s last elected government in 1991, the country’s fish-rich coastline suddenly became very attractive for fleets from around the world to get in on the action – which they did in abundance and without heed to international law or the livelihood of locals. 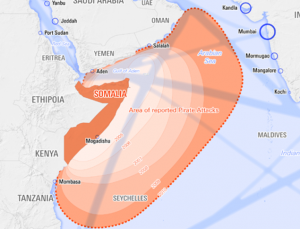 So as Somali waters transformed into a free for all with commercial trawlers stripping the fish stocks with their bigger ships, the local Somalis did what any community conscious group would do: they got organised and then they got even.

The first targets were the fishing trawlers and their crews who were stealing their livelihood. With their tactics and skills against unarmed vessels honed by the frequency of raids and the subsequent rewards increasing their motivation for bigger scores, piracy off the Horn of Africa exploded into a low risk, high return business. At their peak somewhere between 2009 and 2011, 18 cargo ships and 300 people were held captive for ransom by various Somali gangs.

Of course that number didn’t include Captain Phillips and his ship the Maersk Alabama because we all know how that movie ended – though I did feel bad for Abdiwali Abdiqadir Muse, only 18 at the time when he was arrested and now serving 30+ years in an American prison.

Just as rapidly as these shipping corridors became hostile zones, the maritime community and governments of the affected companies reacted with an increased military presence in the waters, while private contractors served as armed protectors on board most commercial ships in the West Indian Ocean.

Deterred but not beaten, it seems as though the Somali pirates were forced into some form of hibernation due to the increased security presence and infinitely better preparedness of crews to react to forced boarding and similar threats.

Until March this year there had been no successful pirate attack on any commercial vessel off the Horn of Africa since May 2012. The vessel that was captured was, unsurprisingly, a trawler that was fishing illegally in Somalia’s Exclusive Economic Zone (EEZ) The only reason this incident didn’t make too many headlines was that it was an Iranian vessel and, well, hey, they probably deserved it simply for being Iranian rather than American or European. There was also a close shave in that same month for two South Korean trawlers that were attacked less than 5 nautical miles from Somalia’s coast by armed men in motorboats.

Ironically, the illegal fishing activities that are widely thought to have instigated Somali piracy appear to be creeping back now that billions have been spent on multi-national military presence. Even more ironic is the lack of action this multi-national force exerts on the illegal activities of commercial vessels in Somalia’s EEZ which is supposed to be protected by the UN Convention on the Law of the Sea.

If piracy – as defined by dictionary.com – includes the term ‘robbery at sea’. Perhaps the term ‘pirate’ could equally be assigned to the companies from various nations who plunder the fish stocks in Somali EEZ waters as the current unfortunates who carry that moniker. Perhaps the term ‘patriot’ is a better descriptor of the Somalis who exist without a functioning government and any influential international ally and are forced to protect their own territory from foreign plunder.

So do pirates go to heaven? Yes. Possibly some do. I hope Abdiwali Abdiqadir Muse will. Do governments go to heaven? No. Never. Not even in Country and Western songs.