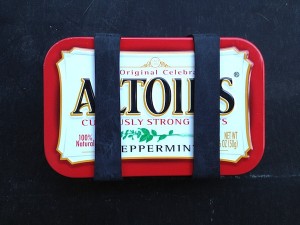 Mark Greenman is part mad-scientist and part caped crusader. His company, Gearward, is a Los-Angeles based outfit that makes really cool tools for urban preparedness, outdoor survival, the odd zombie apocalypse.  battleface asked him to name something he wouldn’t want his mother/daughter/wife to leave the house without and for a few travel tips for solo female travellers. His wonderful reply follows.

There are two things I always recommend the women in my life have. The first is the ability to defend themselves, and the second is a small flashlight.

In terms of self-defense, the very best thing I ever learned was from a fighting class taught by an undercover narcotics officer. He was frequently operating unarmed and alone, dealing with very nasty people.

He taught us that 99.9% of the “martial arts” techniques were far too complicated to remember in an emergency, and so he showed us the go-to move he would use when he needed to defend himself. It was one simple move that anyone learn quickly, and then use in an emergency to disable their attacker for several seconds so they can run away and escape.

The move is called the “Eye Jab,” and all you do is rapidly stick your hand out and poke the attacker in the eyes. He explained that it’s not a permanent injury, but that it’s very painful and causes the attacker to grab their face and blink uncontrollably for several seconds. The best part is that it works on everyone- as he explained, “no one has muscular eyes.” It’s basically like pepper spray, but always with you and you can practice in the mirror by practicing striking the eyes of your reflection.

I teach this to everyone who is important to me because it’s very simple and effective, and all you need is 2 minutes a month practice in the mirror to be able to defend yourself. It’s the ideal self defense move for women as it doesn’t rely on strength, and it’s a complete surprise.

The second item they should always have with them is a small flashlight. Flashlights are a hugely important and under-appreciated tool. It’s dark half of the day, so they’re great to have when walking home at night, or in a dark hallway, alley, or parking lot. They also let any would-be predator know that you’re prepared, and so they will likely find someone else. Also, for travel, they’re very useful for navigating a dark hostel if you’re getting in late from clubbing.

The best two are the Photon Micro Light, which is kept on a keychain, and FourSevens Quark Pro, which is compact enough for a purse but brighter than most police flashlights. I carry both every day, and the Four Sevens helped save me from being mugged in Rio last summer.

Aside from learning the eye jab and carrying a flashlight, here are a couple of other tips:

Have fun and don’t be too paranoid! So long as you take a few basic precautions, it will be wonderful trip.

Coalition for Women in Journalism