Laura Kasinof is based in Berlin right now and is 30 years old. While Rita used to cover conflict directly, now she tries to find stories about people who live on the margins of society, who are taken advantage of by political systems or free markets. These may be in hostile places. They may not. Rita likes covering 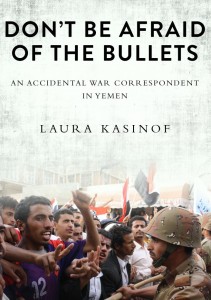 stories that aren’t at the top of the news agenda and aren’t what everyone else is doing.

I really stumbled into conflict journalism, more than most others, I would say. I studied Arabic in university and was working as a journalist in the Middle East after college, but it was unplanned, it was just something to do to make money as a young adult. But I loved it. Then, I moved to Yemen to work as a journalist there when the Arab Spring broke out and the subsequent war in Yemen. I was one of the few journalists in Yemen at the time so began covering the protests and conflict there for the New York Times. I quickly became addicted to the story and the excitement of being in a place where so much feels like it’s changing so quickly. I enjoyed covering conflict, mostly. But now that I’ve had time to step back and reflect on my time in Yemen, I think it’s better to not ‘stumble into‘ conflict journalism and rather I try to make consciences choices about when to report in violent places. I have participated in RISC safety training and is a member of the Frontline Freelance Register.

What are the item(s) you can’t survive without in the field?

Ha, I’m a print journalist, so just my notebook! But I’ve managed to do without that a few times as well by finding scrap paper at the last minute. Other than that, the perfect sized bag or backpack for carrying notebooks, etc, but I still haven’t found that yet.

What makes your approach different to getting attention from editors?

I’ve written a book, Dont’ Be Afraid of the Bullets, so that normally helps get their attention.

Describe that item you carry around with you all the time and never use.

A real recorder. I normally just use my phone to record, but I still always bring it.

I have no conflict zone training other than RISC safety training and I did that after I left Yemen.

How do you measure risk and how do you protect yourself?

Well, my aversion to risk has changed. I used to dive head first into most situations as long as I understood that I was not going to be targeted, for example, in Yemen, no one had an interest in targeting someone who was obviously foreign so I wasn’t too worried. Now I take a lot of precautions in situations that aren’t as dangerous. I let people know my whereabouts, which was a mistake I always used to make that has landed me in trouble in the past. I also don’t go running into danger anymore.

Describe your most rewarding career moment.

Getting stories in the New York Times about Yemeni culture that only tangentially had to do with protests and war. For example, I wrote a story about how Yemenis deal with government collapse because of binding ties of tribalism. I was proud of that.

I am currently in Lebanon to produce a series of stories for the Guardian’s Modern-Day Slavery series.