Psychedelic tourism reaches further afield than Amsterdam or Jamaica with tourism to the city of Iquitos in Peru’s Amazon Basin for the ayahuasca ‘trip’ experiencing something of a (mind) boom.

So what is it all about? Ayahuasca is an Amazonian plant mixture that is capable of inducing altered states of consciousness, usually lasting between 4 to 8 hours after drinking the dark, bitter mix. With experiences ranging from mildly stimulating to extremely visionary, ayahuasca is said to be used primarily as a medicine and as a shamanic means of communication, typically in a ceremonial session under the guidance of an experienced drinker. Or alternatively, as just a substance-induced psychosis that feels good; political correctness aside. 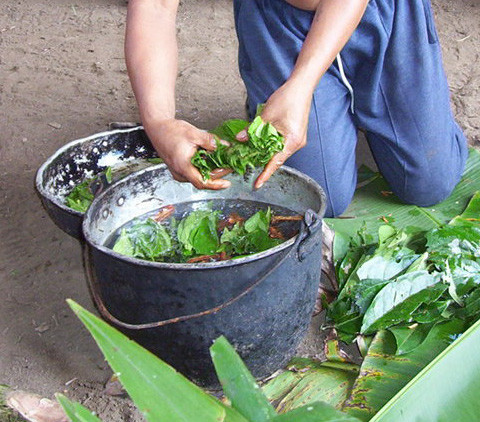 The main ingredient of this jungle tea is a vine, Banisteriopsis caapi, which like the tea itself is also called ayahuasca (which means ‘vine of the soul’ or ‘vine with a soul’). The secondary ingredient is either chacruna (Psychotria viridis) or chagropanga (Diplopterys cabrerana) – both plants that contain a relatively high amount of the psychedelic substance DMT (dimethyltryptamine). To make the brew, shamans boil together these two plant for many hours, sometimes days. As they simmer, the DMT contained in one of the plants mixes with the Banisteriopsis vine and its key ingredient: monoamine oxidase inhibitors, or MAOIs. Normally when people ingest DMT — a not-uncommon compound in nature — the monoamine oxidase in our gut knocks it out. But the Banisteriopsis allows the hallucinogen to reach the brain to deliver the ayahuasca experience.

While nobody knows for sure how long this drink has been used, the first recorded Western contact with ayahuasca was made in 1851 by Richard Spruce, the famous ethnobotanist from England. When taking into account archeological evidence of comparable native plant use, it seems likely that its use dates back to at least two millennia ago.

Locals, of course, will swear by its mystical powers, while for the psychedelic tourist it has popular appeal despite the effects of vomiting prior to the ‘trip’ (known as purga). Puking, apparently, is all part of the fun and that type of fun now draws over 250,000 visitors to Iquitos, making it something of a boomtown in the Amazon Basin, with the main draw ayahuasca.

There is a very dark side to the promised cathartic and life-releasing power of this brew. With more shamans popping into a busy market, reports of unconscious tourists molested and robbed are increasing, as are deaths from users drinking bogus or dangerously laced quantities of ayahuasca. The hype that is bringing this many tourists to the remoteness of Iquitos is also bringing the vices that uncontrolled and unregulated psychotic tourism develops on the underbelly of success. Apparently a fix of ayahuasca (or a brown mix that is claimed to do the same) is easier to get at airport arrivals than a taxi.

The safest bet for the trip on a trip to Iquitos is to check in to one of the dedicated centres offering the ayahuasca experience and pay the ‘high’ prices for the journey.

Is freelance media in freefall?

How Covid-19 is affecting travellers and workers outside lockdown zones